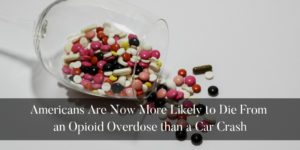 For as long as cars have been getting us from place to place, there have been associated dangers involved. We’re all aware of the potential for accidents, and even death. It’s something we’ve learned to deal with. Our lives now revolve around the ability to quickly travel from place to place.

However, you might be surprised to learn that there is now a bigger risk for Americans. For the first time, you’re more likely to die from an opiate overdose than from a car crash in our country.

Over the past few decades, our country has entered an opioid crisis. You’ve probably seen the shocking news headlines. You may know friends or family members that have suffered with an addiction. We’ve even written an article about how Hillsborough County has sued opiate manufacturers and distributors.

The problem has only gotten worse.

The National Safety Council recently released their annual Injury Facts report. The report highlights just how out of control the problem has gotten. According to the report:

The Problem Gets Worse

The good news is that your chances of dying in a car crash continue to fall. Our cars and our roads are getting safer and that’s good for us all.

The bad news is that our country has a drug problem. These painkillers have stolen the lives of many Americans since they first became commonly prescribed in the 1990s. Pharmaceutical marketing and lobbying led to a sharp rise in opiate prescriptions. They were treated like a miracle cure with no downsides.

Patients began receiving far more prescription painkillers than were needed, and this led to addiction. By the time we realized what was happening and cracked down, it was too late. Many past patients turned to street drugs like heroin and synthetic opiates like fentanyl to fill the void. The death count continued to climb.

It’s too late to turn back the clock now. We can only move forward and do our best to fix the crisis at hand. How can we fix the problem? Here are some suggestion from the statistics manager at the National Safety Council:

Meanwhile, many pharmaceutical companies have paid out billions in fines for deceptive marketing. There are many more lawsuits against pharmaceutical manufacturers and distributors still going on today.