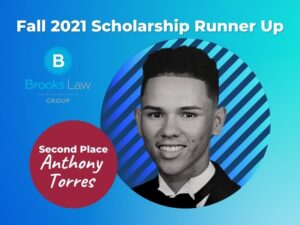 Anthony Torres is our Fall 2021 Scholarship runner up! This is his winning essay submission on ending distracted driving. Read more on our scholarship program here.

For many years, distracted driving has been the cause of countless deaths around the United States. Many of the deaths of teenagers come from young drivers crashing because of distractions that they face inside of their car. Until we cut down on teens as well as other adults driving while distracted the problem will never be resolved. Finding an end to distracted driving would be a major win for the country and would save many precious lives.

While driving, people of any age must deal with distractions on the road. Not only are they on the road itself but also inside of the car. One of the most notable distractions faced while driving is the use of Global Positioning Systems (GPS). As we see in current times with many young people, they do not know their way around places without using a GPS. Due to young drivers not knowing how to get around town, they end up plugging in addresses while on the road. Many times, that does not end happily due to the fact that they must take time to look away from the road. Also, many people that are using GPS systems while driving are attempting to input their destination while they are already moving in the car.

Browsing around the Brooks Law Group Website, there is an article about how driving distracted entails more than just simply texting. The site talks about how drivers inputting address information into GPS systems on their phone is a major problem around Florida now, especially I-4. Another good point is highlighted in the dialogue where Beach Brooks talks on how a large amount of the people that are causing this distracted GPS problem are food delivery drivers. Unfortunately, with the way young drivers’ brains are programmed nowadays, they are dependent on GPS systems and that is a major factor in distracted driving around the country.

In Florida alone, The Florida Highway Safety and Motor Vehicles reported that in the year 2020, 299 people passed away due to distracted driving. This is still a major problem today because of these deaths that are still occurring. On the road, everyone should feel some type of safety in knowing that themselves and others are completely focused on what is around them. Distracted driving continues to be an issue because drivers, especially ones in their teenage years, tend to have a belief that they are invincible in a way that nothing bad can or will ever happen to them. Sadly, that is never the case.

This can continue to be an issue in the future as technology continues to advance. Prior to the 2000’s, there were not as many people dying in car accidents. In an article made by The Washington Post, more people have died in accidents post the year 2000 than in both World Wars. That is first due to driving under the influence but also the increase in the use of cell phones over the course of this century so far. Simply, the more advanced technology gets, the more people are going to be tempted to use them while driving, resulting in crashes and sadly more deaths.

With the number of deaths that are occurring because of distracted driving, it needs to be minimized as much as possible. In order to reduce those numbers, people need to be held more accountable for doing things that are causing unsafe, distracted driving. It should begin with laws being put in place that force doing things that disrupt driving to be illegal. That way police officers would be able to pull over and issue tickets to those that are putting others around them in danger. Likely if those types of laws are put into effect, distracted driving will majorly drop because people will not want to take the chance of getting tickets. The benefit these laws will have on the people and teens of America could save many lives. The youth of the driving world, since they are the most prone to using devices while driving, should be taught the consequences, and shown the statistics of the people that end up losing their lives in accidents. If these drivers are shown the effects of distracted driving it could lead to a decrease in accidents caused by it.

Distracted driving on the roads nowadays is one of the biggest problems our country must deal with. It is claiming the lives of many individuals, and young teen drivers are at the forefront of the cause. Educating drivers and creating laws that will be enforced can lead to a huge decrease and have a major impact on the next generation of drivers and increase the safety of everyone in cars and on roads.

Anthony is a senior at Haines City High School. His passion in life is playing baseball–he will be a three-year starter on his baseball team at school and it will be his second year as a captain of the team. After high school he will be attending Mid Atlantic Christian University where he will be majoring in Business Marketing and will also be playing baseball. Anthony prides himself in the classroom as well. He will be graduating this spring top 5 in his class out of 570 students with a weighted GPA of 4.3. His goal for the future is to own and manage a sports training facility so he can give back to the youth that love the sport of baseball as much as he does. Congratulations, Anthony!