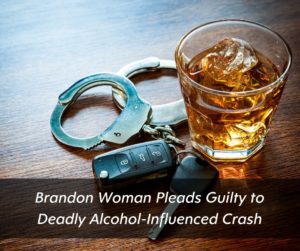 Of all of the foolish mistakes people make, driving under the influence has to be near the top. After decades of statistics and public service announcements, we all know the danger of driving while intoxicated. We know that thousands of people die every single year because of it. We have taxis, public transportation and even services like Uber and Lyft now. There is simply no excuse for getting behind the wheel while intoxicated.

You may remember a tragic story from a few years ago where a family of three was killed on the Selmon Expressway in Tampa. Last week, the driver that caused the crash pleaded guilty to several charges that will most likely put her away for a long, long time.

Two years ago, a family of three lost their lives after a driver slammed into the back on their car on the Expressway. Records from the driver’s Kia showed that moments before she collided with the family’s car that she was driving at 121 mph. After the collision, the family’s car was sent across the median and into oncoming traffic where it struck an SUV.

The family’s car quickly erupted into flames and killed a mother, father and their 8-year-old daughter. This was a tragic end to a family whose only mistake was being in the wrong place and the wrong time.

The Brandon woman who caused the crash fled from the scene and continued to drive until she lost a wheel on her Kia. At this point, law enforcement arrived and conducted field sobriety tests, which she failed. Later tests at a hospital revealed a BAC level of .10 five hours after the crash. They also revealed high concentrations of marijuana in her system.

Last Friday, the woman plead guilty to charges with a combined maximum sentence of more than 90 years in prison.

Drunk Driving: A Recipe for Tragedy

No matter how many times we’ve heard about the danger, it’s clearly never enough. Every year, thousands of people die from drunk drivers. As long as people are still losing their lives, like the family in Tampa, we must continue to educate others. Here are some shocking numbers from the National Highway Traffic Safety Administration (NHTSA):

There’s just no excuse. In 2019, it’s never been so easy to avoid driving under the influence. There are few places in the country where you’re more than a few minutes away from easy transportation. Don’t ruin your life, or the lives of others, by making such an avoidable mistake.

Thousands of people die or receive life-changing injuries from drunk drivers every year. If you or a loved one was injured, or even killed, by a driver that was under the influence, we want to help you. With more than 25 years of experience helping clients just like you, we know what it takes to get you the compensation you deserve.