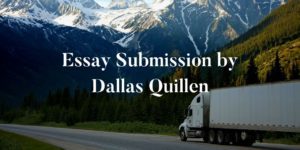 Essay Question: Should semi and large trucks be required by law to have the latest in safety technology? Why do you think the trucking industry and the federal government have resisted attempts to require safety features on semi-trucks?

Elizabeth and I were driving down Florida’s Turnpike on May 14th of last year. We were driving to Gainesville from South Florida, so Elizabeth could complete an internship and I worked. The drive had been dreary as grey clouds tumbled across the sky and rain came down intermittently for hours. Along the way, we made plans for clubs to join and people to see while in Gainesville. Unfortunately, these plans never cultivated to more than simple words. Approximately 45 minutes from our destination, a semi-truck abruptly swerved into my lane and threw my car across the left lane of traffic and into the guard rail. We hit the railings with such force that we rebounded back towards the road several feet. The front wheel of my car was bent upwards and inwards and both driver side doors were jammed shut as the metal was wedged into the door frames. While we were stranded in the median as it began to rain, the trucker cruised on ahead, unaware of the damage he inflicted. I barely got my car back across the road and to the rest stop one mile away. The front driver wheel was so extraordinarily bent that the rubber burned as it slid across the wheel well. A remaining 45-minute drive became a two-hour fiasco as we waited for the tow truck and frantically unloaded my car due to the intense smoke emitting from the wheel and engine. Although horrific, we were alive and unharmed. Not everyone can say the same when they have a dangerous run-in with a semi-truck.

In the year since my accident, I have wondered why semis and large trucks do not have equipment that allows drivers to better navigate their vehicles and increase safety on the road. I was hit from the side of the truck, even though I was not in the driver’s blind spot. I was next to the driver’s door and clearly visible if he had looked out the window to his side mirror. This got me thinking that these trucks should have side cameras in place so that when the driver activates the turn signal, a camera can monitor that side of the truck to check for cars. Although this would be beneficial, what is more, important is an automatic emergency braking system for semi-trucks since rear-end collisions can be far more dangerous. A large truck typically needs 525 feet to completely stop once the brake is applied, while cars only need 300 feet. In the event where a car cuts in front of a semi or the trucker does not apply the brake soon enough, or at all, an AEB can be useful. With an AEB in place, an accident can be prevented from even happening, which further helps to avoid all legal and insurance actions. The legal process behind filing a claim can be grueling and determining who is at fault is particularly tedious. Both drivers and their mental states are considered, and research must be done to see if any guidelines or regulations were violated by the trucking company or those who loaded the trailer. To further complicate the matter, states have different rules as to who is at fault. For example, Tennessee is a “Fault” state and Florida is a “No-Fault” state in terms of accidents. This labeling helps determine whose insurance is billed, but semi-trucks travel across states and if a “No-Fault” and “Fault” state collide, issues can arise.

In an attempt to reduce accidents, three major trucking companies have implemented AEB in their semi-trucks and all three saw drastic reductions in rear-end collisions, ranging from 69% to 80% less over a few years. The same website also states that the National Highway Traffic Safety Administration predicts that with AEB systems, nearly 2,500 crashes can be prevented and nearly 200 people would be saved from needlessly dying in a semi-truck collision per year. With this information available, it is sickening that this type of technology is not required by law to be present on all large trucks and semis. Hundreds of people die each year simply because companies drag their feet through the processes of making large trucks safer. The EU has already implemented AEB systems on their trucks, and in seeing a decrease of crashes, AEB has been added to the list of 19 active safety measures, and every large truck is now required to have an AEB. Laws are designed to set guidelines and save lives, if something is beneficial but not put into law, unfortunately, many people will disregard the benefits due to the cost of adding the preventative measure. The fact that AEB can save even one life, let alone hundreds or thousands over time, is reason enough to implement the system as a required law for all vehicles, especially large trucks and semis.

I believe the primary reason AEB is not required for semi-trucks is because of the cost. The Truck Driving Institute estimates that there are approximately 2 million semi-trucks and 5.6 million semitrailers on the roads of America. In 2017, AAA conducted a study on the cost of equipping large trucks with safety measures and through their research, it was found that it would cost between $310 to $344 for the initial system, but up to $2,500 in repairs and maintenance throughout the life of the AEB system. This is the price per truck and considering how there are nearly 2 million trucks on the road, the cost of an AEB system installed in each one could range from a low of $620 million to a high of $5 billion. This is not easy money to give in to technology, especially since trucking companies still have their own costs of operation. The Brooks Law Group alone states that it has recovered approximately $1,050,000 for their clients involved in trucking accidents. Several other law firms recover money for clients but all of it combined still only pales in comparison to a $620 million or $5 billion price tag for AEB. Another factor is likely the sheer number of projects that the NHTSA undertakes. In 2018, NHTSA had 30 different events, none of which included a conference on AEB. A search of their website only results in one link regarding AEB, and that article is from 2017. NHTSA focuses on many things such as vehicle cybersecurity, data privacy, vehicle-to-vehicle communication, and most notably, advanced cars leading to the eventual self-driving car. The NHTSA seems to be focusing on advancements in the new technology rather than updating older vehicle model standards, such as semi-trucks. With the prospect of self-driving cars, the NHTSA is going to get much more press and positive reviews, being labeled as progressive and leading us into the future; These are things that the Administration benefits from and unfortunately, these glories are simply not contained in the enforcement of AEB in large trucks.

While it does not make financial sense for trucking companies to install AEB and the NHTSA has other, more noteworthy projects underway, these should be among the least important factors considered. When companies and the NHTSA refuse to incorporate AEB into their large trucks, they are effectively saying that they do not care as much for citizens’ safety as they do for their money and praise. Collisions can result in brain damage, disfigurement, broken bones, mobility loss, paralysis, and loss of life. While trucking companies are often required to pay fees for the damages victims experienced, they do not see the pain on a child’s face when they learn their parent has died or the struggle that siblings endure as they relearn to walk. Seeing the black ring of rubber planted on the passenger door of my car, and realizing that Elizabeth and I could have died was horrific; and this was only from a side crash of a semi; a rear-end collision can crumple cars like paper, force the car into others, or run the car into other lanes – causing further accidents. Life-saving and collision preventing technology should be required in all vehicles, especially semis and large trucks. The fact that these systems are not legally mandated is appalling. No cost of equipment, maintenance, or dip in publicity should ever supersede the continuation of one’s life. Living people invent these technologies to save others, not to have them passed over for the sake of companies saving a dollar. 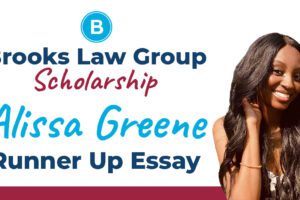