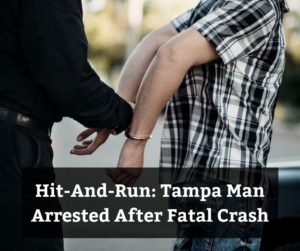 Being involved in a car, motorcycle or truck accident is difficult and overwhelming enough. When one party chooses to flee the scene, it makes it far worse for everyone involved. I hope you’ve never been unfortunate enough to find yourself in that situation, but sadly it’s all too common. Instead of facing the consequences from the beginning, hit-and-run drivers bring even worse consequences upon themselves.

A man from Tampa, 35, was arrested this morning for a fatal crash with a motorcyclist that took place at 1am on Monday morning. The crash took place on Interstate 75 near Gibsonton. The Tampa man was driving a Ford pickup when he rear-ended a 23-year-old motorcycle rider. The motorcyclist died at the scene of the accident after being ejected from his bike.

The Tampa man immediately fled the scene of the accident. He was located by sheriff’s deputies a short time after. Alcohol was a factor in the crash, and the 35-year-old driver was arrested and charged with DUI manslaughter and for leaving the scene of a fatal crash.

If hit-and-runs weren’t a serious problem, there would be no need for this blog post. Sadly, that’s not the case. They are a very serious and all-too-common problem. The statistics back this up.

Can you believe that? More than one a minute!

It’s clear that this is a serious problem in our country. These accidents and deaths disproportionally affect pedestrians and bicyclists. Although it’s clear that it’s a major issue for motorcyclists as well. The drivers involved in these crashes make the situation much worse for themselves by leaving.

Were you injured in a hit-and-run accident? Was a loved one injured? You may need injury and legal guidance. That’s where we come in. At the Brooks Law Group, we’ve been helping our community with all of their car accident, motorcycle accident and semi truck accident injuries for more than 25 years. We’re an all injury law firm serving the entire state of Florida.

Our attorneys and staff go above and beyond to provide the best experience possible for every one of our clients. You don’t need to worry about costly attorney fees or upfront costs. If we don’t win your case, then you don’t owe us anything.

Call our offices now at 1-800-LAW-3030 today or fill out our online ‘Contact Us’ form to receive your free, no obligations case evaluation!