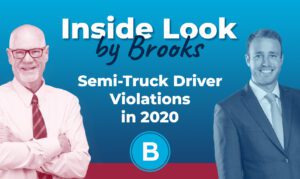 Beach III: Good afternoon, everyone, and happy Wednesday! Thank you for joining us on Wednesday’s Inside Look by Brooks. I’m Beach Brooks here. Today I’m joined by Connor Keith, who works in marketing for us. Connor and I were working on a project together and we discovered that it’s pretty amazing how many truck driver violations there were in 2020. I think there were over 56,000 truck driver violations, a lot of those being failed drug tests. You know, whether that be marijuana, cocaine, amphetamines, or drivers attempting to cheat on drug tests that they’re administering. Connor, what did you find fascinating about the stats that we looked at?

Connor: I think just the number of violations that there was. 56,000—that’s a huge number. That’s really scary. I just could not believe that they found that many violations in one year.

Avoiding an Accidents with a Truck Driver

Beach III: It is pretty scary, especially for people on the roads. Unfortunately, trucking accidents tend to be much more severe than your standard car crash. One reason for that being that semi-trucks are so much bigger than cars. You know, a fully loaded semi-truck can weigh up to 40 tons, and when they’re coming in contact with smaller vehicles, it can be catastrophic to either the driver or the passengers they have in their vehicles. Connor, is there anything you try to do to avoid semi-trucks or trucking accidents when you’re on the road?

Connor: I have a small car, so I’m very careful. I know how dangerous those can be. And I’m terrified of getting in a car accident with one of those. The biggest thing that scares me is the blind spots on a truck. I try to get out of those as fast as I can, but now knowing that there are so many violations, I’m wondering if the blind spot is even the most dangerous thing, you know? I feel like there’s nothing you can do to avoid a truck driver that’s driving under the influence.

Beach III: Yeah, unfortunately there isn’t. One thing that always scares me is when I’m on the interstate right between the middle of two semi-trucks, one on either side of me. I just feel like one of them is not going to be able to see me.

Why You Need an Attorney after a Truck Accident

Beach III: But one reason to reach out to a semi-truck accident attorney at Brooks Law Group right after being the victim of a semi-truck crash is that there are certain loopholes and documentation that we need to get right away from these trucking companies. Any time there’s an employee involved in auto accidents—which semi-truck drivers are—they are required to take a drug test right after the accident to prove that they were not under the influence of any drugs at the time of the crash. And we’re going to want to make sure that happens and we get the results.

Because obviously, if the driver was under the influence of alcohol or drugs, that’s going to significantly impact the case. And we don’t want to give the trucking company, the driver, the insurance company a leg up at the beginning of the case. We want to get involved right away, and get the proper authorities involved. Sometimes the authorities don’t know that these truck drivers need to be drug tested right after a car crash.

What to Do If You See a Dangerous Truck Driver

Beach III: Connor, have you ever seen a truck driver driving under the influence, swerving all over the road, texting and driving? What did you try to do there?

Connor: They’re swerving all over the road, coming into your lane. They’re right up on you, and they’re huge and hard to avoid. And if it’s heavy traffic, sometimes there’s nowhere to go. You know? You can’t get to the other lane, you have to be right there next to them and hope for the best. So I’ve always wondered, if I do see something like that, what can I do to tell someone, “Hey, this driver is very dangerous on the road,” or warn others? Do you know of anything that someone like me can do?

Beach III: Yeah, and obviously you can always reach out to the authorities and let them know this person is driving recklessly. First thing is to try to avoid them—let them get in front of you or pass them so that you are safe. But I would definitely contact the authorities because, as I stated earlier, unfortunately semi-truck crashes can be deadly. Much more deadly than your average car crash. So, we need to make sure that we’re letting the proper authorities know so not only can you be safe, but as well as other people on the roads.

And unfortunately, truck driving is a very stressful job. These people have deadlines to meet, and a lot of truck drivers are very good hard-working men. But just like every profession out there, there are people who succumb to drug and alcohol use. When theses people do it, it tends to be very deadly. So, for everyone out there, please be safe. If you do see any drivers or semi-trucks that seem to be driving recklessly, make sure you do contact the authorities.

Beach III: If you are unfortunately involved in a truck crash, or any car crash, make sure you contact the Brooks Law Group immediately, because we’ll start investigation and make sure we get you the best possible outcome. 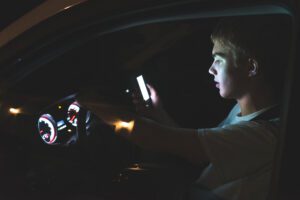 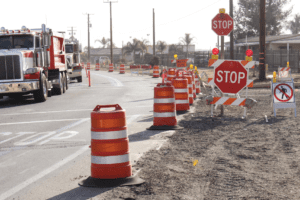 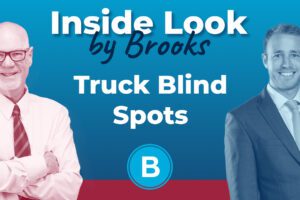