Home Blog Is Human Trafficking a Problem in Florida?

Is Human Trafficking a Problem in Florida? 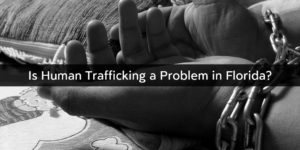 In a world so focused on personal freedoms and social activism, it can be hard to believe that something like human trafficking still exists. If it does exist, surely it can’t be going on in our neck of the woods, right? Wrong. There are more people in slavery today than at any point in history, and it’s a major problem for the sunshine state.

What is Human Trafficking?

You’ve probably heard the term before, but what exactly is human trafficking?

According to the Department of Homeland Security:

Last month, a story broke about a teenage boy in Florida who was rescued from sexual captivity in St. Petersburg. Seven people were arrested after the teen was taken from the mobile home he was held in. According to police, the teen was held captive for an entire year as a sex slave.

In December, a Lake Worth man was arrested for trafficking women and young girls in Florida for a decade.

According to the Florida Department of Children and Families, DCF for short:

If these facts weren’t coming from some reliable sources, I’d almost have trouble believing them! Before doing research on the topic, I had no idea what a massive problem slavery still is in our country. Especially in our own state!

How Are We Fixing the Problem?

This is a topic I plan on covering in more detail in the future. It’s something that our firm plans on dedicating its time and resources to fighting this year. However, there are already organizations and government bodies in our state working to fight this epidemic.

For instance, the Pasco Sheriff’s Office has made a commitment to put a lot of their technology and manpower behind fixing the problem.

One of the programs the Sheriff’s Office has implemented is called the Intercept Bots program. This program relies on numerous bots creating posts online posing as someone selling sex. Whenever these bots are contacted by potential buyers, the bot collects their personal information and sends it directly to law enforcement.

They’re also working to offer help and their services directly to those caught in the sex trafficking trade. This is done by collecting phone numbers of potential victims and reaching out to them via phone to offer help.

How Can You Help?

The most important thing that the average person can do to fight this tragedy is by creating awareness. If you’re anything like me, you probably didn’t realize what a massive problem this was before seeing the facts. There’s a great chance your friends and family don’t either.

Get involved online and in your community to bring awareness to the human trafficking epidemic. Point friends and family members in the right direction to educate themselves so that they can join the fight.

The battle to liberate 40 million people in captivity worldwide will not be an easy one, but it is one worth fighting for. At the Brooks Law Group, this is an issue we’ll be fighting strongly against over the next year, and we urge you to join us!