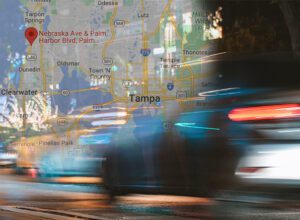 In the early morning of Wednesday, March 9th, a black pickup truck and a black sedan collided in the intersection of Nebraska Avenue and Route 19 near Tampa. Both vehicles were immediately evacuated as they went up in flames, leaving the roadways completely blocked on the northbound side. Although 2 of 3 passengers were taken to the hospital, we know now that thankfully none were seriously, permanently injured. However, there are some key takeaways from the incident that need to be discussed in case of similar car accidents in the future.

Although the incident is still under investigation, we do know that the collision caused the sedan to quickly catch fire. Because of this, drivers abandoned both vehicles in the roadway, causing a closure of all northbound lanes on Route 19. Because of this, foam suppressant was used to quell the flames and ensure the damage didn’t spread. This, however, created major detours for the Tampa area, a place that needs no help slowing down traffic!

What to Do after a Similar Car Crash

If you’ve been on a commute along any major roadways in Florida, you’ve probably seen signage about Florida Codes 316.061 and 316.071. These signs instruct motorists to leave the roadway if they’re in an accident. The law requires drivers to move all vehicles involved in an accident off of the roadway, when possible. Usually this means onto the shoulder or similar place until law enforcement or emergency personnel arrive.

In the case of the accident on March 9th, drivers did not follow this rule. Because of this, roadways were closed. If you are ever involved in an accident and your life is not threatened by remaining in the vehicle, remove your vehicle from a major roadway. If you don’t, you’ll likely get a warning, but there can be repercussions beyond that, like a nonmoving violation.

Important Notes on Moving Your Car after an Accident

It is a commonly-held belief that the best thing to do when in an accident is to stay put. It may seem counterintuitive to move a vehicle after a crash. It’s important to note that, while you are required by law to move off of major roadways in Florida after an accident, you’re also required to stay at the site of an accident until authorities arrive. Never flee the scene after an accident has occurred, regardless of if you are at fault or not. This is considered a “hit-and-run” and they come loaded with legal repercussions for anyone who commits them–up to a felony charge!

Here’s the safest practice when involved in an accident:

This way, everyone stays as safe and accountable as possible.

If you’re in a motor vehicle accident, getting Brooks Law Group on your side can make all the difference. With over 30 years of experience fighting for Central Florida clients, we know what it takes to maximize your settlement. Don’t let the insurance company short you. Call us at 1-800-LAW-3030 today to get a free consultation and see how we can assist you.