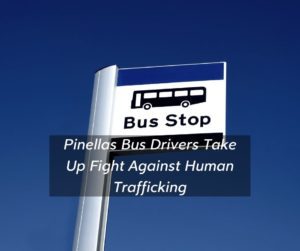 Throughout all of 2019, our law firm spent a lot of time trying to get the word out about the epidemic of human trafficking in the United States. It’s an uncomfortable topic, but it’s an incredibly important one to talk about. If you’re interested in learning more about the tragic problem of human and sex trafficking that goes on in our country and in our state, make sure to check out some of the blog posts we’ve published in the last year.

Late last year, we were excited to learn that our state would become the first in the country to make sex trafficking education a part of every child’s curriculum. This year, Pinellas Suncoast Transit Authority has asked their bus drivers to step up and join the fight.

Bus terminals are frequently used by human traffickers to recruit vulnerable people into sexual exploitation work. Our country’s bus transportation is also used to move traffickers’ victims from place to place. Knowing this, it makes sense that bus drivers are in a position to make a difference in our nation’s fight against sex trafficking. By teaching bus drivers to recognize the signs of trafficking victims and by giving them access to report potential victims or criminals to law enforcement, we can bring the fight to the frontline.

That’s exactly what Pinellas is teaching almost 400 drivers to do. Under a new initiative, bus drivers will complete a course that will teach them to recognize passengers that may be victims in the sex trafficking industry. If a bus driver thinks they have identified a victim or a sex trafficker, they will be able to send out a warning to their dispatch service. Once this warning has been sent out, law enforcement officers will be sent out to stop the bus before it arrives at its destination.

This is all part of a recent push in our government to put an end to sex trafficking in our state. This includes the mandatory sex trafficking education in school curriculums and a law signed last year that requires workers in the hospitality industry, specifically hotels and motels, to receive similar training on identifying and reporting potential victims or criminals.

While we applaud the work being taken up by the Pinellas transportation authority, we hope that other local governments will follow their example. At the moment, there are no plans for instituting a similar program for bus drivers to identify sex trafficking victims in Tampa. However, the city does put up posters designed to raise sex trafficking awareness at many of its bus stops.

You’ve probably heard by now that Super Bowl LV will take place in Tampa in 2021. What you might not be as familiar with is that every year the Super Bowl is a target zone for human trafficking. For that reason, our city needs to be doing everything in its power to fight the problem before next year.

If you’d like to learn more about human trafficking, there are many fantastic organizations in Tampa and surrounding areas that would be happy to educate you on the epidemic and let you get involved in the fight against it. Here are just a few: