School Bus Crashes On the Rise in Recent Weeks 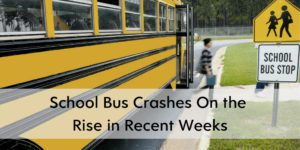 Recently, I wrote an article about a Pinellas school bus driver that has been involved in a shocking amount of crashes (11!) in his career. Sadly, school buses are back in the news. In the past couple of weeks, there have been a rash of accidents at school bus stops across the country. Last Thursday, tragedy struck close to home after an accident at a bus stop in Tampa.

Last Thursday, a driver struck five kids and two adults who were waiting on their bus to arrive. The seven were taken immediately to local hospitals for treatment. The police on the scene said that two of the children suffered serious injuries, but that none of the victims sustained life-threatening injuries.

The accident occurred around 8:00am, and the driver who struck the victims pulled over immediately and remained at the scene. Police said the driver was not impaired, but they said witnesses claimed that the man behind the wheel was speeding at the time.

Local parents said that speeding is a serious issue around their bus stops. While speed limits are prominently posted, drivers are choosing to ignore the law and are putting the lives of children at risk.

Bus Stop Crashes Across the Country

Sadly, the recent accident in Tampa is not an isolated event. In the past couple of weeks, similar tragedies have taken place in multiple states.

Sadly, this list is not comprehensive. There are even more accidents that took place in the span of a few days.

This is a conversation we shouldn’t need to have. Accidents involving children are beyond tragic, and they are completely avoidable. There is no destination so important that the safety of our children should be cast aside to save a couple of minutes.

For the safety of our communities, let’s hold each other accountable. When you drive on public roads, you have a responsibility to stay safe. Not just for your own benefit, but for the benefit of those around you. There’s no distraction or destination worth putting innocent lives at risk. Let’s all make sure that we don’t need to read headlines like this in the future.