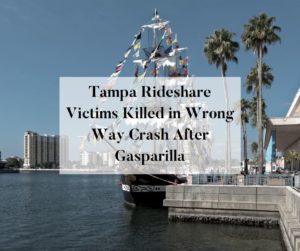 If you live near Tampa, you probably know a thing or two about the Gasparilla Pirate Festival. It’s one of the biggest celebrations in the Bay area every year. The Gasparilla parade is known as the third largest parade in the country with an attendance of around 300,000 people every year. More than 1,000,000 people attend at least one Gasparilla event every year. So yes, it’s a big deal in the Tampa Bay area.

Beyond the massive attendance that Gasparilla generates every year, it’s known for something else as well. The drinking. A recent article from the Tampa Bay Times followed reporters who offered free breathalyzers to Gasparilla attendees.

When you drink, your judgment is impaired. That becomes a serious problem when you choose to get behind the wheel.

Early Sunday morning, tragedy struck near the Tampa International Airport. A 30-year-old driver wearing Gasparilla beads hopped in his Jeep after a night of celebration and the lives of two individuals were lost shortly after.

Police records indicate that the driver was found smelling of marijuana and four hours after the crash he tested above the legal limit for his blood alcohol level. This was not the driver’s first impaired driving offense. He was previously arrested in a different state for driving under the influence and leaving the scene of a crash.

You Don’t Know How Impaired You Are When You Drink

Time and time again, it has been proven that people in an impaired state underestimate how drunk they are. After the Tampa driver who killed two victims in a ride share accident was found by police, he told them that he’d had two beers several hours earlier. That doesn’t line up with the level of impairment that he tested positive for.

The amount of drinks it takes to get above the limit of .08% BAC varies from person to person. On average, it would take a person around 4 drinks within an hour for a person to test above the limit allowed for driving. The effects of alcohol are not the same for all people. You can be impaired and unfit to drive below the legal limit. The safest method for avoiding impaired driving is to never drink and drive period. If you’ve had a drink, you should be looking for an alternate means for transportation. Your life and the lives of others on the road is not worth the gamble.

There is No Perfect Standard for Measuring Your Impairment

Not only does alcohol affect people differently, our bodies metabolize it differently. Alcohol has to be “burned off” or metabolized by your liver. Every hour, your body is able to burn off around .015 percent of its blood alcohol content. You are able to increase your impairment levels far, far quicker than you are able to decrease them.

What does that likely mean for the impaired Jeep driver we wrote about above? Four hours after the crash, he tested above the .08% BAC level. His body had several hours to burn off its alcohol content and he was still above the legal limit. At the time of the crash, he was far more impaired than he was when tested.

You can’t measure or guesstimate your BAC level. All the online BAC calculators and clichés like “one drink per hour” can’t tell you how impaired you are as an individual, because it is different for all of us. If you want to stay safe, stay off the roads.

The Brooks Law Group has been helping injured victims across the state of Florida for nearly three decades. Our firm has knowledgeable and experienced rideshare accident attorneys and car crash attorneys that are ready to take on your case.

If you or a loved one has been injured in an auto accident, especially one where the other driver was impaired, we’re here to provide you with the legal assistance that your case needs. Our team is available 24/7 to help you in your darkest times. Call us today at 1-800-LAW-3030 or fill out our website’s ‘Contact Us’ form for your free case evaluation. We’re here to help!