Tesla Self-Driving Features Have Drivers Dozing on the Roads 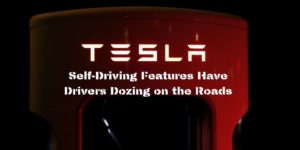 Sometimes it feels like for every step forward, we take two steps back. Tesla has been in the news again lately, but this time the focus is on the drivers, not the cars themselves. In the past year or two, multiple videos have popped up online showing Tesla drivers fast asleep at the wheel. These drivers decided to get a little shut-eye while their electric cars flew down the highway at more than 60 miles per hour.

We know self-driving cars have been making a lot of progress lately, but are we really that far along? The answer from experts and the car manufacturers themselves is a resounding no.

A video went viral this week that showed a driver in California who was asleep at the wheel of their Tesla for as many as 30 miles on a busy freeway. The video shows a driver fast asleep with their hands nowhere near the steering wheel. The person recording the video claimed the Tesla driver was asleep for 30 miles while the car computer system was in complete control.

Tesla’s Autopilot system is what’s responsible for keeping the car on the road and avoiding catastrophic accidents in a situation like this. While the Autopilot system is clearly pretty impressive, it’s not meant to be in complete control on your commute. It’s important to note that Teslas are not self-driving cars. They’re cars with some self-driving features present. A driver is required to be in control while on the roads.

The Dangers of Trusting Too Much

As we mentioned above, Teslas are not self-driving cars. Autopilot is a great system for keeping Teslas in their lanes and accelerating or braking according to the traffic around it. It’s not ready for complete control and this is a fact Tesla frequently reminds drivers of. As a matter of fact, it shouldn’t be possible for drivers to fall asleep while driving a Tesla on Autopilot. The steering wheels are equipped with sensors that detect when a driver is touching or handling the steering wheel. If the driver doesn’t have their hands on the wheel, the car forces the driver to take back control and switches off Autopilot.

This hasn’t stopped commute catnappers though. Drivers have been known to “hack” the system by strapping something with a bit of weight to the steering wheel. This tricks the car into believing a human has their hands on the wheel. It’s crazy how quickly drivers are trusting this new technology with their own lives. The tech is not ready for this level of trust.

Tesla’s Autopilot is a very impressive feature. You’ve probably seen videos of it and marveled at how far we’ve come in just a few years. While this is true, we’re not to the point of autonomous cars yet. These are delicate systems that can go wrong when you least expect it, and drivers need to be in control at all times. It still surprises me how quickly drivers are willing to put their lives in the hands of complex computer systems that they don’t understand.

The Autopilot feature is not able to interpret road signs or traffic signals. At best, it’ll make your highway commute a little easier. At worst, somebody could easily be severely injured or killed if something goes wrong. We shouldn’t have to remind drivers not to sleep in cars that aren’t yet self-driving, and yet here we are. For now, it’s an amusing, if scary, viral video. It’s easy to see how this could cause a catastrophic accident in the near future if drivers keep this up. It’s only amusing as long as nobody gets hurt.

One step forward, two steps back.