Home Blog The Most Dangerous County for Driving in Florida

The Most Dangerous County for Driving in FL 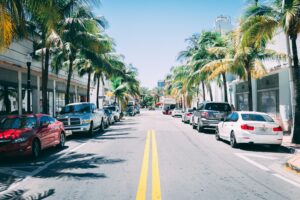 Florida consistently ranks as one of the worst U.S. states for driving. It’s a big state filled with tourist attractions. Whether you’re a longtime resident or visiting for the sunny beaches, big city nightlife, or amusement parks, be prepared to contend with some of the deadliest roads in the country.

Wondering about the most dangerous county in Florida? Proceed with caution in Miami-Dade County. According to the most recent traffic accident statistics from the Florida Department of Highway Safety and Motor Vehicles (FLHSMV), there were 65,143 crashes in the county in a single year. In those accidents, nearly 300 people died and 31,700 suffered injuries.

Broward County has the second-highest number of collisions in the state, with 41,114 crashes that resulted in nearly 215 deaths and 23,671 injures. Even with Broward’s staggering number of auto accidents, Miami-Dade still had 58 percent more.

Most Dangerous Roads in Miami-Dade County

While most accidents in Florida occur on local roads, the state’s interstates through Miami- Dade County have a bad reputation for accidents. Interstate 75, which stretches from Miami past Tampa to the Georgia border, has some of the highest crash rates in the state.

US-27, which also runs through Miami, was named one of the most dangerous highways in the nation in one survey. Suburban expansion has made this highway more congested over the years, especially in Central Florida cities such as Winter Haven, Lake Wales, and Haines City.

Speeding, alcohol, and drug-related crashes are the leading causes of accidents in the Sunshine State. Other common contributing factors include:

Florida law allows people who are seriously injured in car accidents to seek compensation for their injuries. However, a person’s ability to collect compensation will depend on the state’s insurance and injury laws, the facts of the case, and other factors. If you’ve been injured, talking to an experienced car accident lawyer is essential to protect your rights to compensation.

What Can I Do to Prevent Auto Accidents?

Whether you’re driving in Miami-Dade County or elsewhere in Florida, it’s critical to obey the rules of the road. You won’t prevent every accident, but you can do your part by driving responsibly and defensively.

In highly populous counties, try to leave extra room between your car and the one in front of you. Set the cell phone aside completely to keep yourself focused on the road. The state has designated 64 rest stops, welcome centers, and turnpike plazas as “Safe Phone Zones” where you can pull over if you need to make a call or send a text message.

In addition, remember to keep calm if you encounter an aggressive driver. Don’t try to engage them in an argument to avoid a road rage accident. No matter how irritated you are, simply move over and let them pass when it is safe to do so.

The car accident attorneys at Brooks Law Group represent clients injured in Tampa, Winter Haven, Lakeland, Auburndale, and Central Florida. Sadly, we know that our region is also no stranger to auto accidents. Hillsborough County recently ranked fourth in Florida for the highest number of traffic wrecks, with 29,155 collisions, 176 deaths, and more than 21,100 injuries. If you’ve been hurt, we can help you seek the justice and compensation you deserve.

Call or contact us for a free consultation today.