Has your social security disability claim reached the appeal phase? If so, you’ve probably found yourself having to decide whether you’d like to conduct your appeal via video teleconference (VTC) or in person. As of September 2014, claimants must make this decision within 30 days of receiving notice that their appeal has been scheduled. (Previously, you could object to a VTC at any point leading up to the hearing.) While both appeals are conducted by an Administrative Law Judge (ALJ), there are several advantages to stating your case in person. Now that the window of time to make this critical decision is smaller than ever, it’s in the claimants’ best interest to consider these benefits as early in the process as possible.

If you’re considering taking the VTC option, take the following into account:

The one disadvantage? Rejecting a VTC hearing will almost always push back your hearing. To minimize your delay, try to reschedule your hearing as early on in the process as possible. It can take anywhere from several weeks to four months to schedule an in-person hearing after the claimant has refused a VTC appeal.

While it may seem that an in-person hearing is preferable most of the time, it’s always best to decide on a case-by-case basis. At Brooks Law Group, we can help you make an informed decision about your social security disability case so that you receive the maximum compensation allowed by law. If anyone you know needs to file for SSDI or has had their social security claim denied, please contact us for help.

What Types of Law Does the Brooks Law Group Practice?

Where to Start When Applying for Social Security Disability? 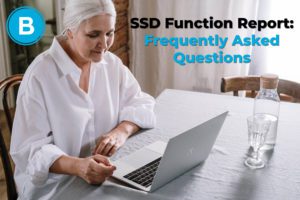